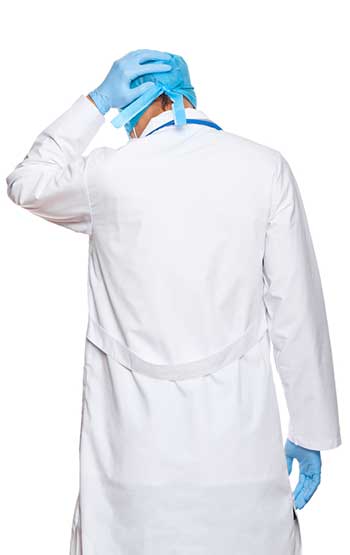 A study published by researchers at Harvard University in the 1990s confirmed what we intuitively know — medical malpractice occurs frequently in our hospitals and clinics and results in large numbers of avoidable injuries and deaths.  The data reported there suggested that the number of avoidable deaths each year from medical negligence may be in the range of 80,000 to 100,000.  Since then, research has confirmed this alarming trend:

These numbers are, indeed, alarming.  Deaths from medical errors each year are:

The plain fact is that “medical mistakes” are one of the most prolific causes of death in the United States.

The numbers alone do not reflect the full extent of the loss that individuals and families suffer when medical negligence affects them personally.  Family members are lost prematurely and unnecessarily.  Health and vigor give way to long-term disability.  Income and earning capacity are lost.  Expenses are unnecessarily incurred.  Lives are changed for the worse.

Medical Malpractice Can Occur in Any Healthcare Setting

If you or a member of your family has suffered a significant injury as a result of medical negligence, we welcome your call. We will discuss your case without charge to you.  If appropriate, we will obtain the medical records and investigate more extensively.  Let us put our experience to work for you.

Please remember:  Time is of the essence in pursuing medical negligence claims.  In Missouri and in many other states, the statute of limitations requires that medical malpractice cases must be filed in court within two years from the date of the negligent treatment.  And it almost always takes several weeks to a few months to investigate a medical case before it can be filed.  So it is important that you call a lawyer as early as possible to start the discussion of whether you have a case.